OA guidelines in H2020, in Science Europe and around the world

To know more about the legal status of Switzerland for its participation to European projects look at State Secretariat for Education Research and Innovation SERI website.

In August 2008, the European Commission launched the Open Access Pilot in FP7 that will run until the end of the Framework Programme.

In December 2014, the European Research Council (ERC) revised the Open Access Guidelines for research results funded by the ERC.

The 51 members of the Science Europe organization are making coordinated actions to guarantee that the results of research and innovation funded by public money in Europe are made openly available. They have defined a list of principles to support the transition to OA. They have adopted minimum expected services from publishers applicable when providing payments/subsidies for Open Access venues. As an active member of this organization, the SNSF has contributed to the elaboration of the principles mentioned therein.

In April 2015, Science Europe, to which the SNFS participates, adopted a list of four minimum expected services from OA publishers:

The Scholarly Communication website at the University of Cambridge Office provides detailed information on Open Access progresses made around the world:

“The Open Access movement as it stands today had its beginnings in 2003 in a report commissioned by the Wellcome Trust on the economics on scientific research funding. Subsequent reports in 2004 by the Wellcome Trust and the House of Commons looked at the viability of alternatives to the subscriber-pays model used by journals. Over the other side of the world Queensland University of Technology in Australia introduced the world’s first University-wide open access mandate in 2004. Since this was introduced they have seen a correlation between research being open access and the rise in the ranking of the university.

Following this, the US National Institute of Health, RCUK and the Wellcome Trust all released policies on open access in 2005. The next major development occurred in 2012 with the release of the Finch report, which has really set the scene for open access in the UK. Since then the open access movement has grown and spread around the world to both developed and developing countries. There is a potted history of open access listed here”. 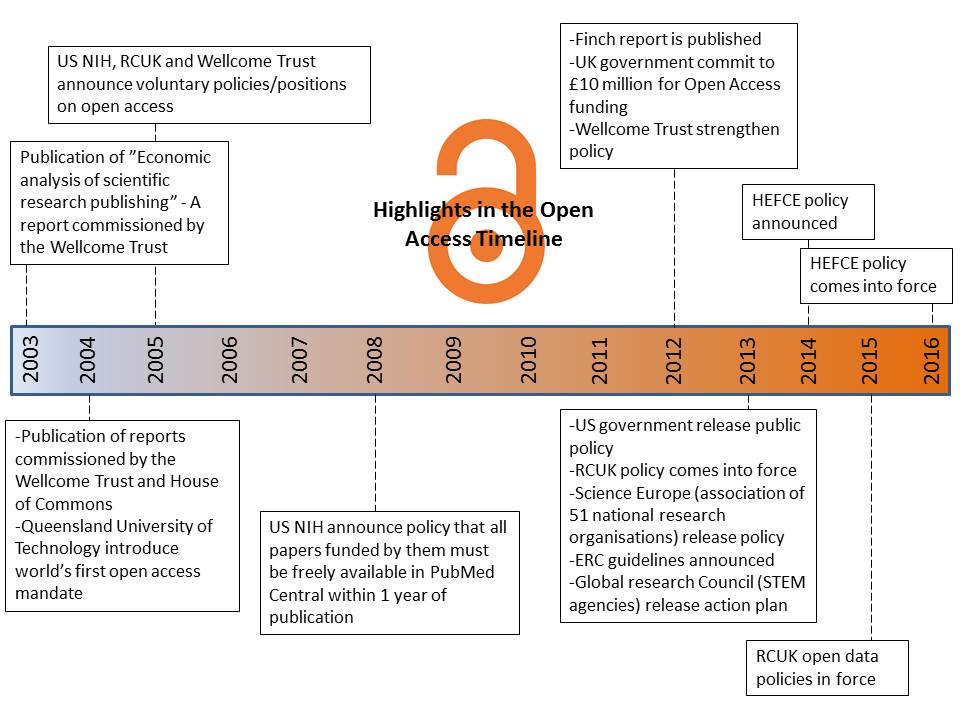 Read the article “US agencies fall in line on public access, Science, 2015” showing that all agencies including the National Institute of Health (NIH) and the National Science Foundation (NSF) have operated a revolution for Open Access using the Green or Gold road. NIH and NSF directives stipulate the obligation for researchers to make their articles open access within 12 months after publication. OA is a prerequisite to receive financing funds.

An examination of OA availability was performed for EU28 and ERA countries and for four additional countries, namely, Brazil, Canada, Japan, and the US. Archambault, Eric, et al. Proportion of Open Access Papers Published in Peer-Reviewed Journals at the European and World Levels—1996–2013 RTD-B6-PP-2011-2: Study to develop a set of indicators to measure open access, 22 October 2014

“For the 2008–2013 period considered as a whole, the Adjusted OA suggests that all 44 countries have more than 50% of papers in OA for that period. Four EU28 countries have even reached an aggregate availability score above 70%—the Netherlands, Croatia, Estonia, and Portugal. It is interesting to note that the Netherlands, which is also scientific publishers’ land of predilection, is the EU country with the largest share of papers available in OA form (74%) as a whole for papers published in the 2008–2013 period and available for free download as of April 2014. All ERA countries have tipped towards having a majority of papers in OA, though in the case of the Republic of Moldova, the margin of error is quite high, and it is quite possible that the country has not tipped to OA yet. Swiss researchers contribute to making their country a leader in OA, with 70% of the papers being downloadable for free. In countries outside the ERA, it is noteworthy that the US has passed the tipping point by a fair margin (Adjusted OA = 67.9%), as is also the case for Canada (64.4%). Even more salient is the proportion of 76% observed in Brazil. This is no doubt due to the important contribution of Scielo, which plays a key role in the Southern hemisphere in making scientific knowledge more widely available. Japan is just a hair over 50% and given the margin of error of Adjusted OA may or may not have tipped to having a majority of papers in OA form. Within the European Union, Green OA is more widely used in Portugal (16.3%), Ireland (15.8%), France (14.0%), and Belgium (13.8%), and least used in Lithuania (4.5%), Malta (5.0%), Croatia (5.2%), and Romania (5.3%). The countries that least use Gold OA journals are France (6.6%), the United Kingdom (7.2%), and Belgium (7.4%).”